A paddler’s career often starts with the question: „What is the right paddle for me?“ While in white water paddling this question is mainly about blade size, shaft length and blade shape, as seakayakers we have another, much more principal question to answer: „Greenland- or euro paddle?“ Sometimes, as in my case (I am kind of a „converted“ white water paddler) this question only arises after several years of very active paddling.

I had a first greenland paddle in my hands some years ago on lake Chiemsee in Bavaria. At this time, I still sat more in my white-water kayak than going seakayaking, but nevertheless I already had quite a narrow blade on my touring paddle. I thought the difference cannot be that large. How naïve I was! I did progress forward with the piece of carbon, but only slowly and it did not feel quite right. My first attempt at the roll ended with a wet exit. What a disgrace! I put away the greenland paddle and did not try another one for more than a year. But... This episode did scratch my ego so badly that one warm and calm summer day I followed my mood and ordered a greenland paddle for myself. It was a premium two-part carbon piece of the brand Kajak Sport from Finland. And what can I say? It came, saw and conquered... As soon as after unboxing it I realized that this paddle in my hands felt totally different hat the test object a year ago. The first strokes on water felt unusual, neither low nor high brace worked as I was used to, but I could roll without problems. My proud was recovered... But what went wrong at the first try?

A greenland paddle inhibits a couple of properties which make it different to a Euro blade. The extremely long and narrow blade provides a very different force distribution in the active phase of a stroke. It provides neither wind (upper blade) nor water (lower blade) with the same resistance. Consequently, „paddling from biceps “, thus by high force to the blade, does not work. The magic words for greenland paddling are rotation and cadence. A clear body rotation together with slightly higher cadence provide the same forward propulsion at lower stress to arms, shoulders and joints. This is one of the most cited advantages of the greenland paddle (of course besides the beautiful look!).

The second large difference is the feather angle. Most Euro-touring paddles are used with feather angles between 30° and 60°. In white water I myself paddle 45° while in the sea kayak with a euro I mostly go down to 30° (already less feather angle compared to white water). The typical greenland paddle, no matter if it comes in one, two or three pieces, does not have any feather angle. In the first moment the paddler thus has to adept to a different style of paddling and holding the paddle. Greenland paddles are used without a clear leading hand.

The water flow around the blade during the different phases of a stroke differs a lot between greenland and euro paddles. As a consequence, for maximum propulsion the blade is slightly angled (canted) to the outside, while the blade angle with a euro blade is typically to the inside. The position of the hands at the shoulder of the greenland paddle supports the natural cant for paddles with a distinctive shoulder (like the aforementioned Inuksuk from Kajak Sport). In order to avoid cavitation (bubbling) and unnecessary wake formation in the water (those burn energy without adding to propulsion) the paddler should give the lead to the paddle and let it righten itself in the water. Operating the paddle with force and tight grip is punished immediately with low propulsion and blistering of the hand. Total ignorance of these facts together with the absence of a distinctive shoulder of the paddle were (besides others) the reasons for my epically failed first try with a greenland paddle. 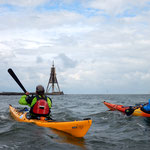 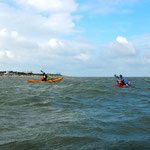 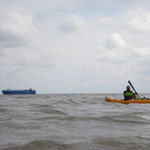 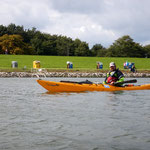 With the Greenland paddle on the North Sea, the Euro-blade serves as spare paddle.
Photos: Anne Stephan and Christoph Kunz

Time warp a couple of years forward, to my first trip of the island of the large tides, Jersey in the English Channel. My first visit was accompanied by a lasting period of strong winds (Force 6 and more) together with high swells and wind seas (more than 3 meters in the open Channel). Nevertheless, we wanted to paddle, thus we went to a more or less covered bay for surf zone paddling. As I already owned my new Greenland paddle for a while by then I felt happy with the idea to go into the surf with a greenland paddle as well. It worked kind of fine. Mostly. But the waves showed me quite obviously that my style of bracing as I knew from white water did not work convincingly with a greenland paddle. „Blade on the water and lean on it“ did not provide any security in the wave. One especially beautiful wave then directly showed me what that meant. Stern lifted, kayak broached (I was not as fit with bow and stern rudder using a greenland stick as I thought) and then I braced into...nothing. In the end I found myself in approximately 60 cm deep water about 100 meters away from the beach, head below kayak in the wet element while the breaking wave was roaring. To everyone’s surprise, myself included, I started to roll and immediately my head was in dry air, upright sitting in the kayak! Why? Because the paddle nicely rested in my hands, it had the right length and the intrinsic buoyancy of the wooden paddle perfectly supported the roll. And, of course, because directly in front of the beach I definitely did not want to wet exit and swim to shore.

A two-piece greenland paddle is an ideal spare paddle, also when paddling with a Euro blade.

With a bit of training and the right paddle the kayak roll works much easier using a greenland paddle than with a euro blade. And if not, one still can use a „gliding“ technique for increasing the torque and even can roll in „slow motion“. YouTube and other video platforms are full of greenland-roll-videos. There are a lot of different techniques, which look extremely simple (and partly they even are). For starting to learn the roll a greenland paddle is actually even better suited than a euro blade. One reason is that the paddle’s buoyancy supports the righting of the blade on the water surface. Another is that the shape of the blade allows a gliding technique for more torque. Finally, the absence of any feather angle allows the aspirant roller to learn rolling on both sides directly from the beginning and she or he does not have to think about how to hold the paddle in order to prevent it from sinking.

Another year gone by. Are all greenland paddles the same? And what else can be found out there? Regarding the first point: no. As with euro blades also greenland paddles come in various forms. The first decision to be made is that of material. Typically, greenland paddles are made of carbon fibre or of wood (mostly cedar and ash or alder, but also other woods are used). It is up to the paddler’s liking what to use. Especially in winter time I prefer wood because it is much warmer in the hands than cold carbon. Further differences are length and shape. Lengthwise one has to try different lengths to find the appropriate one – just as with a euro blade there is no magical formula. Also, the shape has big consequences for the performance of the paddler-paddle combination. A rather straight tip provides more resistance in the water while a well-rounded tip guarantees a smooth insert and put-out of the blade and thus supports paddling with (even) higher cadence.

As mentioned before also the shape of shaft and shoulders is not neglible and resonates into a rather good or bad connection and joy with the paddle.

Besides these general types of greenland paddles there are some rather special ones as well. Since this year I also own a storm paddle and an Aleutian paddle. The storm paddles have been used by the Inuit for exactly this purpose: paddling in stormy conditions. It is similarly shaped as a „normal“ greenland paddle, but significantly shorter (approximately 1,80 meter). Consequently, it is paddled with the gliding technique continuously. What is an awkward paddling motion at first try, gets very reasonable at high wind speeds as no paddle blade is up in the air and thus no wind friction has to be overcome. Also, as a spare greenland paddle a storm paddle can be used as it fits onto the foredeck also as a one-piece. The Aleutian paddle was invented and used by the creators of the Aleutian „baidarka“. It has an asymmetrical blade with a lip on the active side and a distinctive shoulder at the shaft. Furthermore, it has sharp tips. Paddlers used to greenland paddles typically have no problems paddling Aleutian paddles as well. 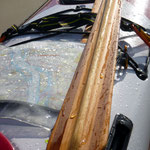 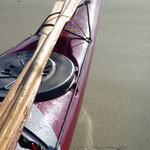 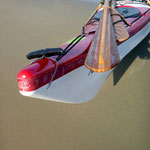 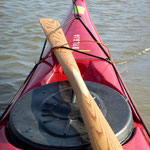 On tour with Aleutian and storm paddle made of cedar wood.

Do I now only use greenland or Aleutian paddles anymore? No, even though I pretty much like paddling them. If speed is my goal, I still use the performance paddle or the wing paddle. If I play around in the rock gardens wanting to have maximum fun between narrow rocks, I remember my old white-water skills and use a short-shafted euro paddle with large blades. For surfing and surf zone paddle a strong euro blade is my first choice. While coaching, I use what my students do have or want to paddle – thus normally euro blade but from time to time also greenland paddle. I do vary my paddle of choice a lot, even on tour. It provides variety and keeps flexible both, mind and muscles. Often, I also use one paddle (euro or greenland) and carry the other one as spare.

Those who never before tried a greenland paddle, should do so quickly. Those, who always paddle greenland paddle would also give the euro a try at least once. As with all paddles also for the choice between greenland and euro blade there is only this one approach: try as much as you can and develop a meaning based on experience. And to those who hold a greenland paddle in their hands for the first time: let someone show to you how to use it, who has done it before. That will prevent you from wasting a whole year before trying again as I did. But be careful: possibly you quickly get to the point that only one greenland paddle is not enough anymore.

See you on the water!